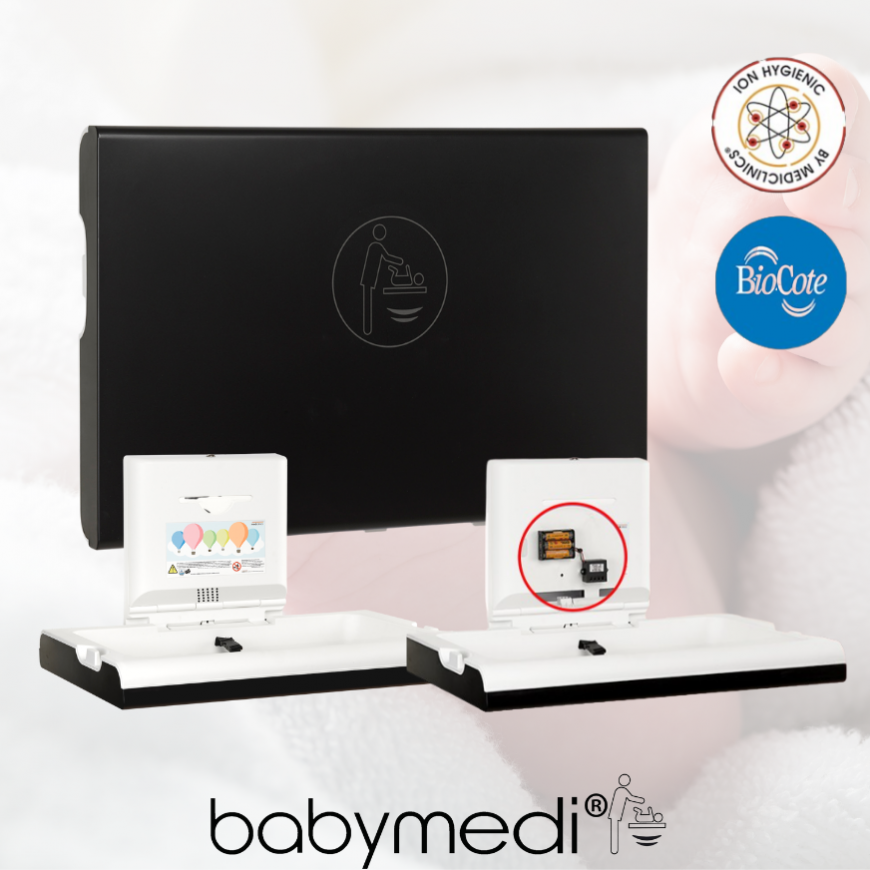 Since the beginning of this terrible Covid-19 pandemic, our parent company Mediclinics, wondered how we could help fight the virus. Countless ideas emerged that were later transformed into new products or improvements to existing products to help fight this pandemic. We are talking about new disinfection stations, new hand sanitizer gel or spray dispensers, HEPA filters, etc. Of course, not all of these are sold in the US but among all these great ideas, we highlight one: the application of Ion Hygienic® technology in our BabyMedi® changing tables as an effective and efficient method of disinfection and sanitation.

Let us explain how this idea came about! Looking for information on how we could fight the virus, we found a scientific article that states that viral and bacterial infections are common among people of all ages, but often seem to be concentrated in babies and children.

This article said that young children are particularly susceptible to viral infections because their immune systems are not fully developed. Specifically, he pointed out that young children get viral infections up to 6-12 times a year during the first years of life. While children already have some immune systems to help them fight viruses and bacteria, this is not the case for babies who are only a few months old. This is the reason why babies are more exposed to infections caused by viruses and bacteria. This risk of infection increases in public toilets, especially if these places are not properly and regularly disinfected.

This article got us thinking about how we could make our baby changing tables, already safe with Biocote® antimicrobial technology, even more hygienic. There were many good proposals to improve the hygiene level of our newer BabyMedi® stations, and the best of all was to apply the Ion Hygienic® Technology, which we were already introducing in our Machflow® Plus hand dryer.

What is Ion Hygienic® Technology?

Ion Hygienic® is a technology based on the generation of negative ions through an ionizer. Ionizers are electrical devices that, thanks to the generation of these negative ions, are capable of transforming stale or polluted air into pure air and can also help disinfect surfaces. An ionizer removes most microorganisms that may be harmful in the air and/or on the surface of objects.

The Ion Hygienic® Technology applied to a baby changing table is capable of disinfecting its surface by means of an electrical charge. The ionizer, mounted inside the diaper station, uses negative ions to remove particles, microbes and odors from its surface. Therefore, making the surface of the changing table healthier and safer for babies.

Can you imagine a station for changing diapers installed in a shopping center, an airport, a restaurant, a nursery or any other place free of harmful microorganisms for your baby? This is Ion Hygienic® Technology.

How does Ion Hygienic® Technology work?

Imagine eight electrical electrodes inside the ionizer and that enough voltage is applied between them. Negative ions are immediately produced in the discharge region by collisions and fusions between electrons and particles. These negative ions, with the help of positive ions in the air, by electrostatic attraction, form clumps around micro-particles such as mold, viruses, bacteria and dust mite allergens in the air and inactivate them through a chemical reaction.


This mechanism of inactivation of the virus or bacteria is carried out thanks to the negative ions released by the ionizer and the positive ions contained in the air itself that surround these microorganisms. If we go into detail, specifically what they do is surround their proteins (these proteins are responsible for binding to a living organism and triggering infection) and become hydroxyl radicals, a powerfully active substance. These hydroxyl radicals are so strong that they can steal all the hydrogen from these proteins by causing the ions to react and chemically combine to form water. Harmful microorganisms cannot infect more human cells because their proteins are totally damaged, even when they enter our body. At this time, we can say, without any doubt, that the virus or bacteria remains inactive forever.

This entire disinfection process begins just when the BabyMedi® diaper changing table is closed. When closed, when an electronic sensor detects that the baby changer can be activated. This occurs thanks to the magnet installed inside the upper rear part of the BabyMedi® bed that interacts with said sensor. Although the Ion Hygienic © technology is totally safe for the baby, the system stops completely, for safety reasons, if the ionizer is running and the baby changer is opened in the middle of the cycle.

Ion Hygienic® Technology is completely safe for the baby because all it does is reproduce what nature does naturally. Negative ions in the air are nature's way of removing unnatural toxins. It is well known that, in pristine and natural environments, in habitats far from urban centers and industrial regions, the air is much healthier for the human body. Pollution levels are lower and ions in the air are in normal concentration. In nature, this happens thanks to waterfalls, thunderstorms, ocean swells and even sunlight that naturally generate negative ions, and in the new BabyMedi® baby changing table, this emission of ions is due to the action of the ionizer.


How can I be absolutely sure that Ion Hygienic® Technology kills microorganisms that are harmful to my baby?

Ion Hygienic © definitely works. It has been tested and approved by TÜV Rheindland in their laboratories in Germany, as evidenced by their test report number 603229708-001 (as shown above).

Proudly and in conclusion, Mediclinics is the first manufacturer in the world to apply an ionizer to a baby changing table as a disinfecting method. The Ion Hygienic® Technology, as we have seen before, is totally safe for the health of babies because it is harmless and has the ability to kill harmful microorganisms found in baby changing tables. Ion Hygienic® Technology, along with Biocote® antimicrobial additive, make our newest BabyMedi® changing tables the most hygienic changing stations on the market, because no other in the world incorporates these two successful disinfection technologies together.